In December 1674 Olof Rudbeck wrote to university chancellor Count Magnus Gabriel De la Gardie intimating that he had made a startling discovery, a discovery by which everything else he had shown De la Gardie would pale into insignificance. He refused to divulge its exact nature until they met, but so astounded was Rudbeck that he would be unable to keep quiet about his discovery for long.

He had discovered Atlantis.

The mysterious Atlantis – this isle of the gods – for a short time in some far off period of ancient history had been the home of an advanced civilization with immense riches, before one day it was suddenly devoured by the sea, never to return. Its rediscovery had been the dream of countless men of science but now, Rudbeck declared, they would need to search no longer. He could demonstrate that the Atlantis of Plato was in actual fact Sweden, and that its key component, the holiest part of this strange kingdom, had been located in Gamla Uppsala. Just how he became convinced that the royal palace of subtropical Atlantis had been situated on a weather-beaten plain of clay outside Uppsala is anybody’s guess, but if we believe Rudbeck it was surprisingly easy.  The evidence was everywhere if only one had eyes to see – in parallels between the Bible and the Norse sagas, in topography, folklore, astronomy, cultural geography, geology, mathematics, architecture, physics, and numerous disciplines besides. Moreover, the measurements provided by the ever-reliable Plato were so exact that it was quite impossible to go wrong. One just needed to go out and measure. And that is precisely what Rudbeck had done. 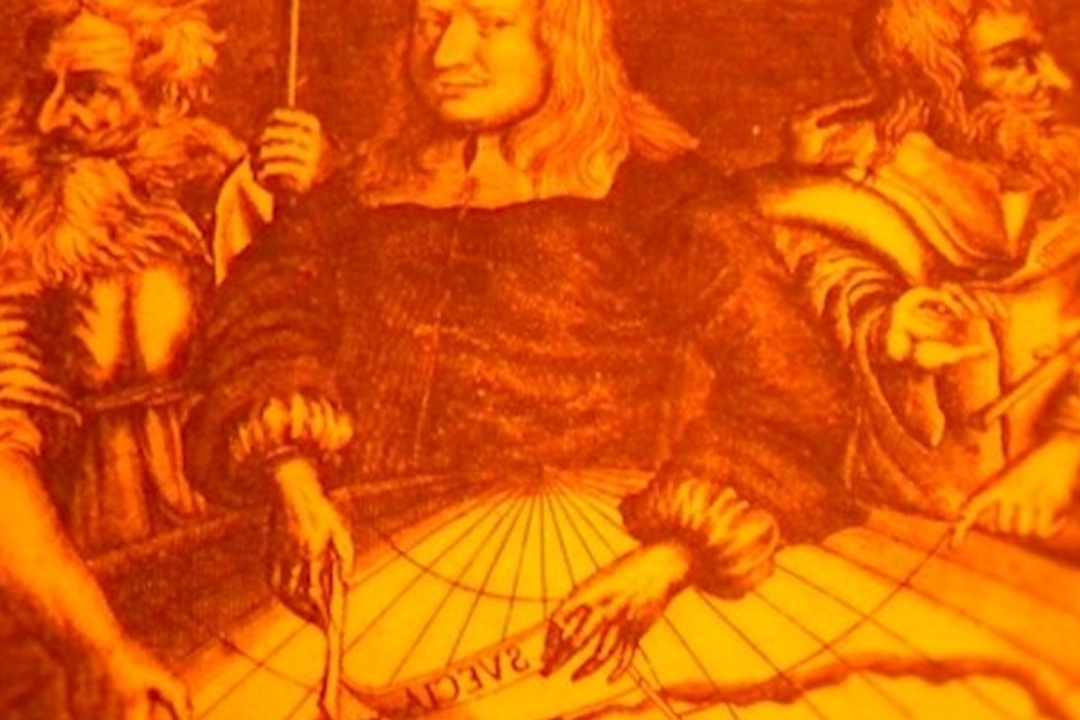 No other work in the history of Scandinavian literature has been discussed by so many but read by so few as Olof Rudbeck’s Atlantica. The spectrum of opinion ranges from patronising humour to violent denunciation. Articles on Rudbeck and his magnum opus rarely fail to mention his astonishing trains of thought, dizzy place-name etymologies, and acrobatic powers of deduction. And in order to underline just how manipulative this rumbling figure was, Rudbeck’s detractors claim that Atlantica, this meaningless portfolio of folly and fantasy, came to be ‘the Official History of Sweden’. This is of course veritable nonsense – Atlantica met with heavy criticism on its release, but in the case of Rudbeck, clichés live a life of their own. We need to be convinced of our own consummate abilities and thus allow Rudbeck to personify the inadequacies of earlier forms of historical research. The idea is then for us to shake our heads and remind ourselves what a far better grip we have on science today.

This is a very risky point of departure. A closer study of Atlantica and Rudbeck reveals good reason to question his reputation as a patriotic crank. Although his conclusions were frequently unhinged, to put it mildly, his approach was very often more scientifically defensible that many others we see today.

It would be too simplistic to claim that the huge interest in ancient Uppsala which flared up in the mid-seventeenth century stemmed solely from a desire to demonstrate the magnificent past of Great Power Sweden or the abilities of its illustrious, ancient kings. In reality, the interest in Uppsala was closely connected with the iconolatry debate then raging in Europe, a debate that centred on the relationship between Crown and Church. Scholars including Olof Verelius and Johannes Schefferus were deeply engaged in the matter – no other place in Europe provided a better model for this relationship than ancient Uppsala. The problem was that no one could agree on its location. The fifteenth-century historian Ericus Olai had argued that the famous heathen temple had been situated in the present-day town, whereas Verelius claimed Gamla Uppsala to be its true location. He was rebutted by the formidable Schefferus and a correspondence known as ‘the literary feud’ soon began. When Rudbeck entered the fray the situation soon got out of hand.

Rudbeck stirred things up by applying modern scientific methods and ways of thinking in order to shed light on historical problems. Not only did he bring to prehistoric studies subjects as varied as surveying, landscape analysis and geology, he also looked at the primary archaeological material – a frighteningly modern idea. The remarkable flurry of spades, crowbars and ‘mathematical instruments’ with which layman historian and medical doctor Rudbeck amused himself at Gamla Uppsala went against the grain of the accepted principles of historical research. For Rudbeck this approach was perfectly natural. In the same way that he was unable to understand the function of the lymphatic system without rolled-up sleeves and a scalpel, neither was he able to analyse ancient monuments without boots and a spade. His premise was simple. Things lay hidden in the ground.  If a king had built a hall at Uppsala, its remains would be found by digging in places a royal hall ought to be. This failed to endear him with those who thought the same knowledge could be obtained by reading books. We may note that Rudbeck’s archaeological observations are frequently more useable today than anything 1920s archaeologists managed to produce.

Some scholars have gone to great pains to incriminate Rudbeck with telling historical lies. Yet one striking characteristic of the individual details in Atlantica is that Rudbeck never strays far from the truth. While he certainly exploits any possibility to his full advantage, he never even comes close to fabricating evidence. Many of Rudbeck’s maps have been dismissed as fabrications, particularly those showing exaggerated watercourses, which were important for Atlantis advocates who wished to demonstrate that Gamla Uppsala had been surrounded by the sea. The subject of watercourses was one familiar to Rudbeck. His anatomical studies had focused on flow and discharge – the keys to understanding the circulatory and lymphatic systems.  In other words we can count on Rudbeck being observant in matters of this kind. He does make the odd mistake, just as he did with the ‘channels’ of the human body, but by comparing Rudbeck’s maps with modern-day aerial photographs, geophysical surveys and older maps an interesting picture emerges: Rudbeck’s observations are strikingly accurate.

Rudbeck’s place-name etymologies have proved popular with those wishing to poke fun. Thus his interpretation of the place-name Uppsala has been dismissed simply as the work of a crank, conceived on the spur of the moment. Fortunately, Rudbeck’s extant notes allow us to follow his etymological study, and a skim through the first five- or six-hundred pages proves his conclusion to be no mere whim. Rudbeck believed Uppsala to mean ‘the open hall’. A cursory search of the literature soon finds examples of open temples – in its original sense ‘temple’ meant an open space with views over its surroundings. Rudbeck’s earlier studies led him to believe that the tower of Gamla Uppsala church was the oldest, original building. It was thought to rest on eight pillars and was thus essentially an open structure.

Rudbeck soon ploughed his way through every lexicon he could lay his hands on, finding that sal or sala denoted a royal palace or regal room in every conceivable ancient European or Oriental language. He was overjoyed to discover a note in Glossarium by Charles du Fresne showing that sal or sala could refer to a specifically appointed palace room where justice was administered. This was exactly how Uppsala had been described! Rudbeck now pondered whether sal – Latin aula – might refer to a holy room, a temple.

Yes it could. In a ninth-century collection of hymns, Notker Balbulus calls God’s temple Gotes sal, and Homer himself had described the Temple of Zeus as dios aule. Rudbeck had now managed to include the ancient Greeks too. Could it get any better?

Nor can Rudbeck’s archaeological excavations be dismissed as works of lunacy or flights of fancy. His excavation record from Gamla Uppsala church is observant and detailed, and demonstrates an understanding of stratigraphy too. In autumn 1681 an event caused Rudbeck to focus his attention on England. In a letter dated 18 January 1691, professor of mathematics Andreas Spole recalled how ten years earlier he and ‘a few others’ had accompanied Rudbeck to Gamla Uppsala where they had ‘dug some holes’. While this may alarm modern ears, the group did in fact uncover something that would have kept them busy for the rest of the day. Spole recounted that on the site of one of the former cathedral transepts – which had been demolished in the mid-fourteenth century – the group had found ‘a great stone, resembling an altar, upon which [lay] much charcoal, ashes and bone.’ They concluded that it was the remains of a ‘pagan altar’. The excavation probably took place on 23 September 1681, as Rudbeck noted all too briefly on a plan he drew at the time. He also mentioned numerous ox and pig bones – a known feature of the site. This made him overjoyed: Lancelot Andrewes, bishop of Ely and Winchester, had noted an identical phenomenon in A Learned Discourse of Ceremonies.

In 1653 Andrewes had described the discovery under St Paul’s Cathedral of numerous ox skulls, which he interpreted as the remains of sacrifices to the goddess Diana. Similarly, nearby Westminster had once been the site of a temple to Apollo! This confirmed Andrewes basic political-theological theory:

… out of the former rags of the Gentiles, the glorious and fair garment of Christianity in times may be woven.

All of this was unparalleled symbolism for those wishing to show that the monarch – the Idolater in Chief – had tamed idolatry as a force for good. Rudbeck was dumbfounded in admiration. His conclusion matched that of Andrewes – the most important churches had been founded on the sites of heathen temples and the ox skulls were the remains of sacrifices to Diana.  Everything now fell into place – in Heimskringla Snorri Sturluson had described the sacrifice of oxen at Uppsala, and Plato’s Critias mentioned the sacrifice of oxen too. Because Rudbeck believed Diana to be synonymous with the (highly apocryphal) Norse goddess Disa – who was widely thought to have been worshipped in Gamla Uppsala – these facts were a godsend that apparently proved everything.

Of course they proved nothing. But leaving aside these dreams of Atlantis, we can simply state that Rudbeck’s hypotheses were rarely aimless fragmentary ideas, thrown out at random. On the contrary, when he combines antiquarian observations with topography, local folklore and written sources Rudbeck becomes a figure of genius – even when he is completely wrong.

Rudbeck’s vision of Atlantis was nothing unique to the seventeenth century. Atlantis – whose proponents maintain their valiant quest today – seems to occupy some indeterminate space on the shoreless seas of the obscure imagination. Study after study presents the most astonishing ideas, but no matter how eloquent these Atlantis researchers are, how refined their theories, or how complex the instruments with which they blind us, one thing remains strikingly clear – Rudbeck, in comparison, is a shining beacon of sense and science.